I’ve made no secret of the fact that there is a Big, Crazy Plan to all of the Maradaine books.  I don’t get too specific about it, as I don’t like talking too much about books that aren’t finished or contracted, if not both.  As much as I believe I am capable of accomplishing my goals (and doing it in a relatively efficient manner), I prefer not to say THIS BOOK IS COMING OUT SOON until I know that it’s actually true– or as true as it can be within my power.  This is part of why I talk about Other Things vaguely.  Because too often you can say This Is  A Thing I’m Doing and then there’s an Amazon or Goodreads page for a thing that you’ve decided to shelve.

But I digress, because I wanted to talk more about the process of putting together the plan– both for individual books and long term.  I’m, as I said, a big fan of outlines for both things, and working out where things need to go to reach the place I want it to in the long term, while maintaining compelling storytelling and plot in the individual novel. 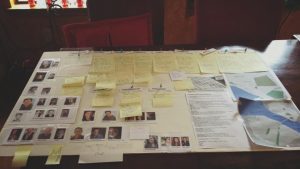 This is a pretty personal process for me, that involves a fair amount of sitting in front of a large work area and scrawling notes by hand, which then form a skeleton of the plot.  This is largely solitary, but sometimes I need to talk something out, or hack out the bigger points and that’s where Dan comes in.

If you’ve read the acknowledgements on any of my books, you’ll see a big one always goes to Dan Fawcett, who’s been my friend and sounding board for about thirty years now.  While there are plenty of people who know Maradaine and understand what my goals for it are (including my editor, the once-again nominated for Best Editor Sheila GIlbert), Dan knows it in a way no one else does.  He knows about the long-term story, about characters you all haven’t even met yet, and the deep secrets being threaded throughout.  I’ve written out about 20K words of Long Term Plan that was essentially for his eyes only.  (My agent has seen this too, but he decided not to read it, because: spoilers.)

However, if with his help, it’s still 95% me, sitting down at the table, and hashing it out.

And now: time to get to work.