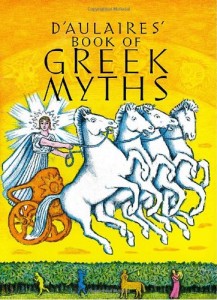 hen I was a kid, there was one book I just plain consumed, over and over again, which was D’Aulaires’ Book of Greek Myths.  This book, to me, was the gold standard for taking something as rich and complicated as Greek Mythology and making it accessible to a young audience.

I loved this book as a child. It was first published in 1962, but it’s rather timeless.  I had my dog-eared copy as a kid, and my son received two copies for his fourth birthday from different people.  It’s a good child-gift book, after all.

I remember in sixth grade, we were doing a unit on ancient Greece, and for reasons that I can’t quite recall, I was surprised by the fact that I was supposed to give an oral presentation on Greek mythology, which my teacher thought I was going to be utterly unprepared to do.*  But since I had read this book backwards and forwards numerous times, I then took up the entire class period relating the various stories I had long since consumed.

So this was my first grounding in the classics.  The D’Aulaires also wrote one on Norse Mythology, which I read as a kid, but it didn’t stick with me in the same way.  But if you’re looking for a book to give a child that will blow up their imagination into all things fantastic, well, you could hardly go wrong with it.