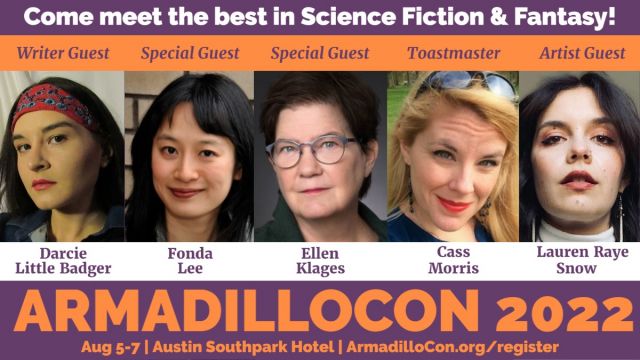 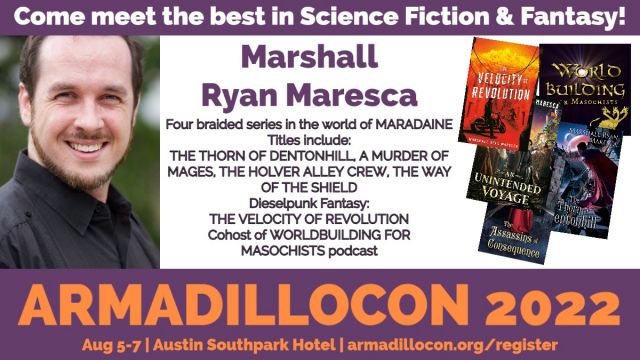 It’s just about time for ArmadilloCon!  I’m very excited about this year’s Con, as I got very hands on with programming this time around, which gave me the excuse to bring together some of my favorite people in SFF.  Including putting myself, Cass Morris and Rowenna Miller in a room together for the first time!  That’s extremely exciting, and we’re doing a Worldbuilding for Masochists live panel to celebrate.  I’m thrilled.

(And just as a reminder, Worldbuilding for Masochists is nominated for a Hugo, and you can still vote for the Hugos up until August 11th (https://chicon.org/).)

But if you want to know my ENTIRE schedule, here goes:

Tiffany and Steve’s Fantastical Adventure: The Fallacy of Authenticity Sat 11:00 AM
Too often in historical and secondary world fantasy, we are challenged with the idea of “authenticity”, but what actually IS authentic? What happens when authentic feels wrong? What happens when “wrong” feels authentic? And what even IS “wrong” when you’re creating it from scratch?
Cass Morris, Marshall Ryan Maresca, Skyler Gray, Natania Barron, Rowenna Miller, Steven Brust

It Was The Best of Times, It Was The Worst of Times: Fantasy Movies of the 80s   Sat 5:00 PM
The decade gave us Conan the Barbarian, but also gave us Conan the Destroyer. Not to mention Krull, Ladyhawke, Legend, Red Sonja, Beastmaster, and a whole host of other fantasy movies that are somehow both Not Good and Deeply Beloved. Join us in a discussion of this canon of 80s Fantasy films, and how they shaped our ideas of the genre, for better or for worse.
Mark Finn, Jon Black, Marshall Ryan Maresca, Natania Barron, Stina Leicht Worldbuilding for Masochists Live Podcast Sun 11:00 AM
Hosts Cass Morris, Rowenna Miller & Marshall Ryan Maresca do a live episode of Worldbuilding for Masochists, where they’ll dig in deep to some worldbuilding ideas, answer audience questions, and help everyone build until it hurts.

And, yes, we are having the official release party for The Mystical Murders of Yin Mara at ArmadilloCon. I’m thrilled to team up with Sim Kern and their new book, Real Sugar Is Hard To Find, which is a fantastic short story collection.  GET IT.  Or come to ArmadilloCon, come to our release party, and get both out books signed by us!

If you aren’t able to come to ArmadilloCon and still want to get The Mystical Murders of Yin Mara, there’s a few ways!  For paperback, right here.  And for ebook, you can get it here, currently with a pre-order discount price of $1.99!

Hope to see you at ArmadilloCon, or if not, hope to hear from you soon.