When I was a kid, one of the cliched things we were told about Native Americans was how they used “every part of the buffalo”.  Now, this is a perfectly true statement, but it was presented with a sense of astounded wonder, that it was a unique cultural trait. It certainly seems almost unbelievable to us in the here and now, where the process of animal-to-meat or grain-to-bread is largely invisible to most of us. But the truth is that maximizing the use of animals, plants and other resources is a common trait for any pre-industrial society.  What they use and how they use it can be a defining part of worldbuilding.

Now, I’ve talked about domesticated animals and fertile centers of origin, which are crucial things to consider when building cultures from the ground up.  But there’s more to that then just listing the available crops and animals. 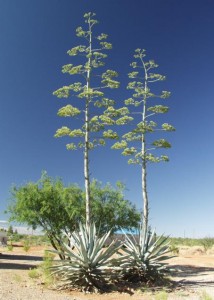 Take for example, the agave plant, cultivated in pre-Columbian Mexico and American Southwest.  It was a source of food, fiber for cloth, a fermented beverage (pulque), and is now the source of tequila.  The spiny tips of the leaves could be used as weapons or ornament.  The woody central stalk could be used for instruments, tools, Its use was the focal point of ceremony, its preparation a defining point of culture.

Moving away from the agave specifically, consider howyou can use the process of cultivating, harvesting and preparing a central crop in defining the culture.  Is the plant sacred? Is the use religious?  Are only certain people allowed certain uses?  Who, and why?  The same can be applied to animals.  What does the animal mean to the culture?

Now, this is where research is crucial.  If a resource is crucial to a culture, you should understand what all the potential uses are.  Does that mean you need to know how to go from seed to finished product?  Not necessarily, but having that knowledge wouldn’t hurt.  Especially since that knowledge can further define how a culture operates from day to day.  If, like in the case of the agave, the crop must be roasted to transform the sap from a poison to an edible sugar, then method of roasting itself can help define a culture.