Today is my anniversary (13th!), so it seems appropriate to talk about the worldbuilding aspects of marriage and other rituals of joining.  Marriage customs are rarely the center of any worldbuild, but they do add a certain degree of flavor and color to the cultures you create.

I think the first thing one should do when crafting the marriage customs of another culture is clear your head of morality and expectation of what marriage “should” be.  I mean, yes, of course you can keep the marriage in a built culture exactly the same as you see it here in your own.  But there are some questions you should ask yourself when coming up with How Marriage Works there:

At the core, there are four forms of marriage: monogamous, polygamous,  polygynous and polyandrous. The last two are subsets of polygamous, but it’s important to make the distinction, though we often use the term “polygamy” (marriage of multiple people) when we really mean polygyny (a man with mulptiple wives).  Polygamy can take many forms beyond one person with multiple spouses.  It could be a group of people all married to each other (like the line marriages of Heinlein’s The Moon is a Harsh Mistress) or one where each person has multiple spouses, but there isn’t necessarily a bond between said spouses (like the Denobluans of Star Trek: Enterprise, where Phlox has three wives, and each of those wives has two additional husbands, and each of those husbands has two additional wives… and so on.)

Legal and social expectations get to the core of What Marriage Means for the culture.  For example, in my fantasy setting, the Xonacans are matriarchal polyandrists, and men are explicitly the property of their wives.  Similarl the questions about who is allowed to marry and how the decision is carried out informs a lot about the culture. Are certain social groups are barred from marriage?  Are marriages arranges?  Do the upper classes have arranged marriages?  Are same-sex marriages allowed?  Do people marry in their teens, their twenties?  As children?  Is fidelity expected? Are divorces common? Or is marriage binding until death?  Are marriages essentially business arrangements, or are they done for love?

Which then opens up another question: are there other rituals of love?  Or joining?  Adoption, for example, could be something that the culture ritualizes.  Another example from my setting: amongst the Ch’omikTaan, a feudal warrior culture, two men can bind their houses together by making themselves brothers– a ritual similar, but not identical, to a marirage.

And beyond what marriage means, what does a wedding entail?  Is it a simple legal contract, or a seven-day ceremony?  These details can really help define the cultures of your world. 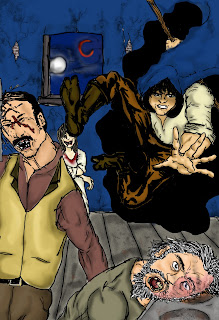 And on another note, I’ve achieved an authorial milestone: fan art from one of the early scenes in Thorn of Dentonhill.
Hopefully this is a sign that a deal is right around the corner.