I just turned 40, and my son just turned 13, which has me thinking of significant milestones and coming of age.  We make a big deal out of turning 40, of course, and 13 is considered at least a gateway into adulthood.

When I was 13, I went to several bar- and bat-mitzvahs (and one b’nai mitzvah), and I always found the highly ritualized element of “and now you are an adult” fascinating.  Of course, in that case, it was partly fascinating because, on many levels, it was just about the ritual.  My friends weren’t expected to get their own apartments and get jobs, after all: they were only 13.

How a culture deals with that transition into adulthood can be a fun bit of worldbuilding.  It can be something very specialized and ritualized, or it can be a casual observance.  Here in North America, the tradition of a Sweet Sixteen/Quinceñera party is more the latter, but it says the same thing: you are (nominally) an adult now.

In Druthal, it’s not much of an observance at all.  Druths tend to be a practical, unsentimental people, so it’s mostly understood that at 15 you start some sort of work or higher schooling.  In Thorn, Veranix is 17 and is in his third year at the University of Maradaine.  In Maradaine Constabulary, one of Minox’s younger brothers is 15, and he’s just started as page in the constabulary– the traditional form of apprenticeship before becoming a proper patrolman.

Other cultures on that world have more specialized methods of marking their coming of age.  In Acseria, a theocratic state, there is the Rite of Declaration, where a young adult commits themselves to one of the specific sects of the church, as well as claiming their “adult” name. These two choices are, of course, deeply personal, and represent the child’s readiness to be their own adult person.

Another culture with a highly ritualized coming-of-age process is the Bardinæ, who are divided into clans.  Clan affiliation is not finalized until the age of thirteen, when children and their clan-guardians take a pilgrimage to the holy city of Jaukmeira, and each child is allowed– for the only time in their life– to touch the Jaukmeir, the great sacrosanct obelisk in the center of the city.  From touching the Jaukmeir, they then declare to either join their clan or be one of the Yja, the clanless holy men. If they choose their clan, then the mark of that clan is tattooed onto their face.* 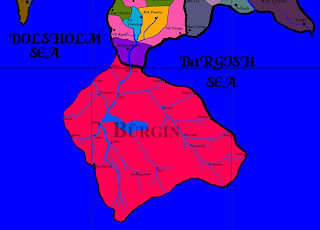 However, my favorite tradition comes from the Bürgin, a culture of loose city-states.  Bürgin is the farther southern part of its continent, close to the antarctic circle, and it’s filled with nearly-frozen rivers.  These rivers are the life-blood of the culture: the source of food, trade and power.  So if you’re a child the community believes is ready to be considered an adult, the ritual is very simple: they throw you in the river.

If you manage to survive and swim to shore: congratulations.  You’re an adult.  If not, you weren’t ready.  Too bad.

—
*- Since children aren’t marked as being in a clan, it is a tradition amongst the Bardinæ to kidnap children from rival clans, and then deliver them to the Jaukmeir as their own.