I’ve been thinking of late about how aliens, upon first meeting, would establish communication, as well as how communication continues once those baselines of communication have been laid down.

As far as starting things out, there’s plenty of talk of using the language of math and science to establish initial codes.  For a very rudimentary example of this: 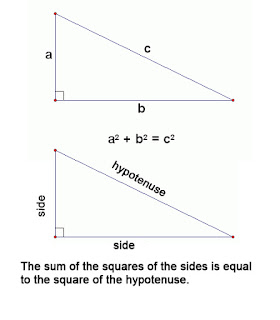 Now, just about any species capable of, say, achieving
spaceflight should be able to look at this and decode– from the top part– the mathematical truism that is the Pythagorean Theorem.*  Then looking at the bottom part, they should be able to decode that it’s saying the exact same thing in another way… and from there, discern details about the English language, how it’s constructed.  You construct several of these images, and transmit them to the aliens you hope to talk to, and cross your fingers that those shoulds line up, and that you don’t offend said aliens who think you’re trying to patronize them and teach them basic math.

Of course, getting those shoulds to line up still makes assumptions.  For example: “look at this”.  What if said alien species is, as we would understand it, blind?  Would they even have developed the equivalent of Euclidean geometry? Or, at the very least, would it mean the same thing to them?  What about a species that relies more on, say, echolocation and perfect pitch?  Would their Euclid equivalent instead come up with fundamental mathematics based off of musical pitches and frequencies?

Even presuming we can get all that, then there’s culture shock.  I’m still figuring out where to start with that.  Take, for example, how we and other species might process “scary”.  A species that’s eight feet tall, with six long, spindly legs, winged arms like a bat and a face like a lamprey would, probably, on first meeting, look terrifying.  But at the same time, our beauty-contest winners would still look like just another rat to them.  We might both react with fear at seeing each other, and that fear could seem utterly rational, but at the same time be completely unexplainable to the other party.

So how hard is going to be, opening a dialogue with someone who makes you want to run screaming from the room, and the same time they think that you think they need to study 5th grade math?

There’s a great short story by Kij Johnson, Spar, in which a human woman is stuck in an alien lifepod with an alien creature.  There is no meaningful communication.  There’s only, from her perspective, constant sexual activity that wavers between consensual and non-consensual.  She doesn’t know if what it’s doing to her is, as far as it’s concerned, a sexual act.  She isn’t sure if it thinks of her as an intelligent being.  She’s not even sure if it is an intelligent being; she might be having sex with the alien equivalent of a cat.

And that might be what it comes down to: just not knowing anything, because there’s no common ground at all.

—
*- Completely tangential**, but every time the Pythagorean Theorem comes up, I can’t help but think of one of the dumbest moments in early Star Trek: Next Generation.  Having assembled Data’s evil brother Lore, the crew (not knowing Lore is evil) is showing him how the helm on the Enterprise works.  Riker brings up the first half of the Pythagorean Theorem, which Lore automatically finishes, before stopping himself and feigning that it was something he had overheard but didn’t really understand.  I’m not sure which part of this whole exchange is dumber: that Riker thought that tricking Lore into revealing he knew the PT was a clever trick at all, or that Lore thought that pretending he, an android, didn’t understand middle-school geometry, was somehow a clever ruse.
**- Ha!