This is a special entry into the Bad Movie I’ve Seen Many, Many, Many Times Canon.  For one, it’s our first request.  Now, surely you’re asking, who can make a request for a movie that I’ve seen many, many times.  Well, my sister, that’s who, since any movie I saw many, many times, she almost certainly did as well. 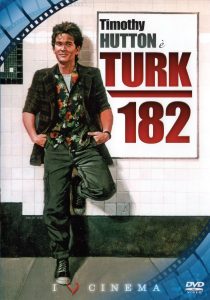 This one is also strange because, while I’ve seen every scene in this movie oh-so-many times, I honestly don’t think I’ve ever actually watched it in its entirety in one sitting.  This sort of thing isn’t uncommon if you grow up with a all-the-movie-channels cable package, because you’ll flip around and settle on a movie that’s only got a half-hour left, or you’ll watch the front half of something on HBO for forty minutes to kill time before you switch to the movie you actually want to see on Showtime.  Turk 182! is kind of the perfect movie for that.  It’s a movie nobody wants to watch, but if it’s on, eh, fine.

The movie focuses on two brothers.  Our main character is Timothy Hutton, who’s the young, ambitious smart guy in a blue-collar family.  I honestly can’t recall if he’s got an actual job or career or such in the movie, but he probably doesn’t, because there’s no way he’d have the time to do everything he does in this movie if he’s also got to go to work every day.  I’ll get into that.  His brother, played by Robert Urich, is a salt-of-the-earth good-guy firefighter.  Timothy worships his older brother, and Robert will point to his brother and say, “This kid’s gonna make something of himself!”  Or something like that.  It’s been a while.  Anyhow, one night they’re drinking at the local firefighter-bar in New York City when someone runs in and says there’s a fire.  Robert Urich, despite being a few drinks in, just charges out and into the burning building, saving a little girl.  But while he’s in there, other firefighters burst in with the hose blasting, knocking him out the window and smashing into parked car below.

So, Robert’s badly injured, but because he was off-duty and drinking, the city is all, “Sorry, nope” about paying his disability or medical expenses.  Which is a fascinating dick move.  Like, regardless of him having a few drinks, his injuries were 100% because of the negligence of other firefighters.  Maybe that’s why his fellow firefighters are hanging him out to dry with the city.  But the point is, he’s looking at a long rehabilitation, and no one is going to pay for it. 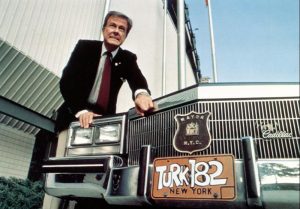 That’s no good as far as Timothy Hutton is concerned.  So he takes it all the way to City Hall to confront the mayor and get what’s fair for his brother.  The mayor blows him off (“Your brother’s a drunk!”) and no help is given.  And I can stress this enough: the other firefighters nearly straight-up murdered him.  Fault is so obviously theirs its almost comical.  But this sort of thing was typical in 80s movies: city officials that are nothing but bureaucratic penny-pinchers who will never do the right thing.

So, Timothy Hutton gets his hot-head on and wallpapers the mayor’s office with all the rejection letters his brother’s received from the city.  He does this while the Mayor Tyler (Robert Culp) is doing crunches in the next room and his deputy-mayor eats a burger.  I am not making that up.  This was the glory of movies from the 80s that you just don’t see today: utterly random, go-nowhere character traits in secondary characters that honestly make them feel more real.  Namely, the idea that the mayor used to be fat, but now has lost weight and is into fitness.

There’s a lot of strangeness in orbit of the mayor in this movie, but we’ll get into it.

Anyhow, since Timothy Hutton’s character was previously yelling at the mayor about his brother’s treatment and then letters to his brother were all over the mayor’s office, Timothy Hutton is the obvious suspect and he’s immediately arrested and the movie is over. 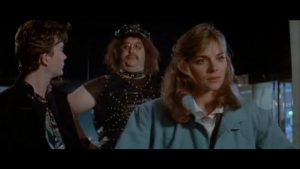 I’M KIDDING.  That doesn’t happen for no real adequately explained reason.  Instead, Timothy Hutton continues to stalk Mayor Tyler, and in the meantime make eyes at his brother’s social worker, because she’s played by Kim Cattrall.  That’s the obligatory romantic subplot, and I’ll get back to that.

See, Mayor Tyler has his own problems, in that there’s some inadequately explained scandal involving a guy named Zimmerman who fled the country before his trial.  The Mayor wishes people would forget about that and instead focus on his whole anti-graffiti, clean-up-the-city campaign.  But protestors disrupt one of his events by painting “ZIMMERMAN FLEW AND TYLER KNEW!” on the golden apple that was supposed to symbolize the clean city.  The mayor is incensed, obviously.  Timothy Hutton sees all this go down and then GETS AN IDEA.  Namely, that he is going to copy those protestors.

This is where we get into the real meat of the movie, in which Timothy Hutton becomes GRAFFITI BATMAN.

He starts this campaign when the mayor is unveiling this fancy graffiti-proof train, that has some special coating that spray-paint won’t stick to.  His tech people assure him, in order to tag this train, someone would have to take a sandblaster to it first.  Cut to: Timothy Hutton sandblasting the train.  Seriously, ALL ALONE he pretends to be a city worker, stops the train before it gets to the event, and sandblasts and spray-paints the train, and ALL THE WHILE none of the people who are on the train adequately question the guy who IS CLEARLY SPRAY-PAINTING THE TRAIN before it arrives at an Anti-Graffiti Event.  The only person who even thinks something might be off is Peter Boyle, the Mayor’s Chief of Security.  But by the time he manages to bumble over to check things out, the damage is done and the train engineer drives right into the press event, with ZIMMERMAN FLEW, TYLER KNEW, TURK182! plastered on the side.

Needless to say, the mayor is put out.

I’m just amazed that the logistics of pulling all this off are kind of glossed over.  It’s basically, “Every city official, including cops and train engineers, are super-incompetent, so he just gets away with it.”  Same thing when, later in the movie, he just takes over the Yankee Stadium Jumbotron to further tweak the mayor.

That’s most of it: we get a whole lot of montages of TURK182! getting tagged everywhere, the mayor getting steamed, and the cops being in full Keystone Mode because no one can catch this mysterious Turk182, whoever he might be.

Except Kim Cattrall figures it out, because it’s literally no mystery at all.  Robert Urich’s nickname is “Turk” and his badge number is 182.  But he’s in the hospital with all the broken limbs, so it’s clearly Timothy Hutton.  When Kim Cattrall figures this out, she does what any reasonable person would do: gets naked and waits in his bed.

REALLY, THIS IS WHAT HAPPENS.

So Timothy and Kim get together, as the romantic subplot dictates they must.  My favorite bit of all this is, when she presses him about the whole “Zimmerman Flew, Tyler Knew” thing, he admits he really has no idea what that’s about, it’s just something to piss the mayor off with.

She convinces him to go public, but Turk182 has become such a sensation, hundreds of people are confessing to be Turk182.  So when he goes to a reporter and gives the whole story, it gets filed away as “just another nutcase”.

The big climax is on a bridge, where there’s going to be a huge lighting-up-words on the bridge ceremony, so of course Timothy is on the scene, rearranging the lights while pretending to be one of the workers.  This time he finally gets noticed in the act, because you can’t scaffold up and down a giant bridge with cameras literally broadcasting the event live without a few people noticing.  While he tries to finish re-setting the lights to make it read “TURK 182!”, Peter Boyle is losing his damn mind about it all, and tries to murder Timothy Hutton, and failing that, kill any city electricians who want to keep the power on.  But Turk182! has become such a beloved folk-hero that the city electricians are all, “screw that, turn the power back on” when Peter Boyle goes away.  So the lights stay on, and the final, giant Turk182 message goes out.

And the mayor… he doesn’t really have a change of heart, but he knows a publicity opportunity when he sees it, so he basically decides to just roll with it, telling the deputy mayor, “When he comes down, we’re going to say we’ve been rooting for him the whole time.”  All is well, Robert Urich finally gets the financial support he’s due, and Timothy and Kim are a happy couple or… something.

So a campaign of public vandalism… works?  Is that the message?  I mean, what he does is the 80s equivalent of getting a hashtag trending, and because the people like a good story that gets the mayor mad, he succeeds. Like I said before, there was a definite streak in the 80s of hating city officials and bureaucrats (like Walter Peck from Ghostbusters), so a story about a little guy winning against a heartless bureaucracy with nothing but wit, heart, and Jason Bourne levels of skill when it came to spray-painting things.

Or maybe it’s all about what Timothy said when Kim asked him why he’s doing it.

Yeah, that’s about it.