I’ve come back from FenCon, where I had a wonderful time, despite a few minor glitches (highway traffic making me a few minutes late for my first panel, sound-pollution disrupting another panel).  I always enjoy FenCon a lot, and seeing the usual crew of Dallas/Forth Worth/greater Texas writers.  Plus I got to visit with some other old friends who used to live in Austin (who were kind enough to offer their hospitality to me for the trip, for which I am ever so grateful.)

I would love to just fall down and leave this blog post at that, BUT… The Imposters of Aventil will be released in a mere eight days.  It’s funny, because I said a while ago I commented on how the New Release thing would never get old, and while it doesn’t… it’s no longer this momentous event of panic.  I know the steps to this dance now.  But it means I’ve got to write some guest posts and a few other things to get my ducks in a row for the release.

But, in the mean time, you can still pre-order The Imposters of Aventil, the book the Tenacious Reader says, “carries forward with the fun and excitement I’ve come to expect from the Maradaine series” and SF&F Reviews calls “a sharply observed investigative thriller in a mature and well crafted fantasy world“. 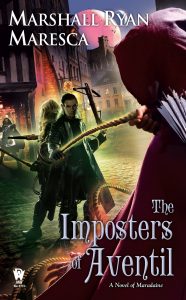 THE IMPOSTERS OF AVENTIL
Forthcoming October 2017