Back when I did the DFW Writer’s Conference last year, the keynote speaker said, in part of her keynote speech, “Stephen King reads four hours a day and writes four hours a day.  That’s fundamental”*  The quote got posted to Twitter, and then retweeted like crazy until it reached the level of public consciousness that my wife** quoted it back to me.  Of course, upon hearing this, many complained that they, unlike the esteemed Mr. King, do not have eight hours a day to devote to their craft.  This misses the point: it’s not the total hours, it’s the ratio.

Of late, my ratio has been off.  Very off, and I think that it’s had an impact on writing the rough draft of Way of the Shield.  It’s not quite writers’ block, but it is a sort of slow-as-molasses drip of words that isn’t coming as easily as I would think it ought to be.

And I think the problem is I simply haven’t been reading like I should.  The Writer Brain is a hungry beast, and if nothing goes in, nothing comes out.  I’ve been justifying this to myself in saying that I haven’t had time to read, but I know that’s really not true.  The truth is I hadn’t managed my time of late to make reading a priority.

That’s got to change.

So I went to my bookshelf and took down all the books on my ever-growing shortlist.  Here it is, in no particular order***: 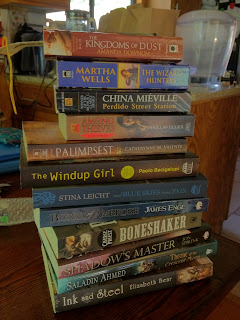 So, starting with Kingdoms, which I’m about a third of the way through, I’m going to devote the next few weeks to reading all of these.  I’m going to TRY to read one a week, and write about each one here.

Because, when it comes down to it, being a better reader makes one a better writer.  I’m kind of amazed when I hear people say they want to write a book, but when pressed they basically will tell you they don’t read at all.  AT ALL.  It shocks me.

If anyone has suggestions about reading order (in other words, what I tackle after Kingdoms), I’m all ears.

—
*- I cannot comment on whether the quote is accurate of Mr. King’s actual habits.
**- My wife is relatively off-the-grid, and certainly not connected to the writerly blogosphere.  If something viral reaches her, it mean it’s gone airborne.
***- The order is pretty much “Order I grabbed them off the shelf and made into a pile”.