I’ve been hinting for quite some time about big news, and finally I’m ready to tell you about it.

First, the slightly sad news: the third Maradaine Constabulary novel, A Parliament of Bodies, will not be released until Spring 2019.  I know many of you have been anxious for the next installment with Satrine and Minox, and it is going to come out, just a few months later.  This is entirely due to production schedule and release strategy– because we’ve got something else planned for release in the fall of 2018.  And so much more.

What is going on?  Well, I’ve signed a contract for FOUR new books! 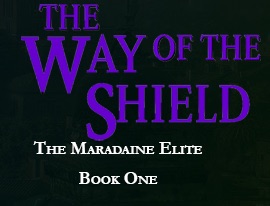 And, yes, you already can pre-order it.  THE WAY OF THE SHIELD is up on Amazon, Barnes & Noble, Goodreads, and all other places you can think of to go for books.

Launching this fourth series puts the final piece in place, introducing you to Dayne and his world.  And it was important we did that before releasing A PARLIAMENT OF BODIES, as you can see… 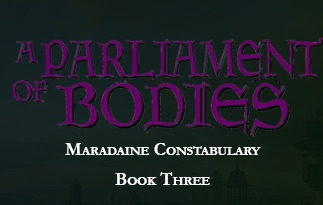 The city of Maradaine is vexed by the Gearbox Murders: a series of gruesome deaths orchestrated by a twisted mechanical genius. With no motive and no pattern, Inspectors Satrine Rainey and Minox Welling— the retired spy and untrained mage— are at a loss to find a meaningful lead in the case. Until the killer makes his most audacious exhibit yet: over a dozen victims in a clockwork deathtrap on the floor of the Druth Parliament.
The crime scene is a madhouse, and political forces conspire to grind their investigation to a halt.  The King’s Marshals claim jurisdiction of the case, corruption in the Constabulary thwart their efforts, and a special Inquest threatens to end Minox’s career completely.  Their only ally is Dayne Heldrin, a provisional member of the Tarian Order, elite warriors trained in the arts of protection.  But Dayne’s connection to the Gearbox Murders casts suspicion on his motives, as he might be obsessed with a phantom figure he believes is responsible.
While Satrine and Minox struggle to stop the Gearbox from claiming even more victims, the grinding gears of injustice might keep them from ever solving these murders, and threaten to dismantle their partnership forever.

Next up, scheduled for late in 2019, we’ll get the second Maradaine Elite novel, THE SHIELD OF THE PEOPLE, where Dayne and his compatriots get embroiled in a plot of dissident groups threatening to disrupt Parliamentary elections and throw Maradaine into chaos.

“But, Marshall!” I hear you say.  “That’s a lot of focus on the new character, and while we get Satrine and Minox, what about the Thorn?  What about the Rynax brothers?  Have you forgotten about them?”  And the answer is, of course I haven’t.

That’s why the next book will be the third Streets of Maradaine novel, THE FENMERE JOB.  Asti & Verci’s fiery quest for vengeance, and their efforts to bring peace and justice to the streets in North Seleth, will put them and their crew in the line of fire of The Thorn.

Finally, we’ll have THE PEOPLE OF THE CITY, the third Maradaine Elite novel, Dayne digs deeper into the underworld conspiracies that swirl throughout Maradaine, an investigation that will bring him together with the Thorn, Inspectors Rainey and Welling, and the Rynax Brothers— a thrilling fantasy adventure to conclude the first phase of the epic Maradaine sequence.

So here’s how it’ll all look, and the shape of my life for the next two years:

And then?  Well, then it’ll be on to Phase II.  But that can wait for now.