It’s been a bit since I’ve done one of my worldbuilding tour posts: now that the Hugos are voted on, it seems like a good time to return to it. 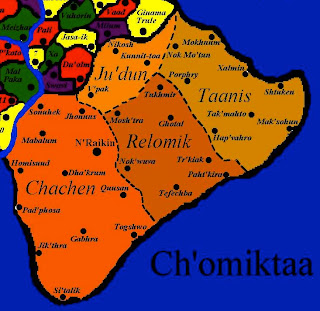 “They came over the hill not as a few hundred men but as one thing—an eagle swooping down or a wave over the sea.  And then they crashed into their enemy in a terrible symphony of metal and flesh and bone.  And it occurred to me, in the most horrible part of my soul, that it was the most beautiful thing I had ever seen.” –Druth General Loren Callum

“In Ch’omikTaa, what they call politics, anyone else would call civil war.” –Lyranan Intelligence Report

“I have stood against The Storm and against a Ch’omikTaan. Both were, indeed, a force of nature.” –Lord Lessak du Retal

“My heart fills my chest
With fear
With dread
My honor is on my face
Tears of blood
Screamed at the sky.”
-Ch’omikTaan Song of Defeat
Ch’omikTaa is a nation of warriors, but it is much more than that to them.  Being a warrior is a noble calling, and an integral part of who they are. War is an art form, a religion, and a philosophy.

The government of Ch’omikTaa is made of two Councils of Elders. The Council is made up of members from the four Ch’omikTaan provinces: Chachen, Relomik, Taanis and Ju’dun. The first three are the main part of Ch’omikTaa, while Ju’dun is considered an occupied territory, as it consists of Jelidan lands and people that were annexed, conquered or allow to join Ch’omikTaan after its initial forming.  It is given least consideration. The Senior Council has nine members , three each from the most prominent Houses from the main three provinces. The Junior Council has thirty-six members, from the remainder of the most powerful Houses in Ch’omikTaa.

The Provinces are all broken into Houses, who control the land. A House’s influence in Ch’omikTaa depends on many factors: its land, its wealth, its militia’s strength. The honor and martial skill of the Elder of a House is also important. Houses are further broken into Families, and Families have varying strength in a House, based on many of the same factors that make Houses strong. Both Families and Houses will vie for power and have their influence wax and wane, through battles, marriages, bondings, sales, Just Conquerings.  Technically, all the Houses in Ch’omikTaa are allied, but at any given time, some House is doing battle with another.

The function of the Council is not so much to govern, since each House is governed by its Elder. Rather, it is a forum for the Elders to discuss the impact of their actions to all of Ch’omikTaa and to defend the honor of their House if its actions are called into question.  The Council also will take notice of and judge any warrior who has come to their attention, for good or ill.  Most actual politics and decisions are made not by a vote, but with battle.

All the laws in Ch’omikTaa center around their Warrior Code.  Thus, an act in violation of this code, such as theft, or ambushing a defenseless enemy, is against the law.  The Code is not specifically written down, but rather is based on hundreds of minute unspoken cultural mores, as interpreted by the sense of the Council.  If Council members feel something is a dishonorable act, it is.  Killing another is not dishonorable, but killing someone through use of poison is.  The “Pillars of Dishonor” are a concept they use to help define a dishonorable act.  The Pillars are Deceit, Sloth, Cowardice, Avarice and Treason.

If someone’s actions are considered dishonorable, they will have to come before their House elder, or sometimes the whole Council, to answer for their actions.  If they are still found dishonorable, the will lose rank, or in some cases, stripped of rank entirely.  This will involve flaying and cutting their skin to remove the signs of rank and family from their body.  Such a person is a pariah in Ch’omikTaan society, and usually leaves the country.

The military in Ch’omikTaa is structured around the ranks of the culture. One of the most important aspects of being a Ch’omikTaan is rank. Rank is both social and military in nature, and is a measure of both the honor and respect you hold as a warrior. Children who have not begun The Rite of the Warrior, fieldworkers and laborers and women do not hold any rank.

It should be noted that in the Council Houses and Families, members hold higher ranks than standard. For example, in one of the Kel’ra Families, a family might be headed by a Demra or Amra, and a Commune could be headed by as high as a Kla. There is much more honor in serving a noble Family or House.

Families are a very important thing to the Ch’omikTaa, but it is also used very broadly.  Many people are part of the same Family, and yet are barely related to each other at all.  Ch’omikTaan are very concerned about their ancestry, and know the line of their fathers back for several centuries.  Loyalty in Ch’omikTaa is first to the Family, and then to the House.

Ch’omikTaan homes are very simple and utilitarian, even for the most powerful of Ch’omikTaan.  They are usually constructed from stone, made to withstand assault, with the only adornments being the symbols for that Family and House, which are found in every room and on the door.  They also usually have very large and high rooms to them, so combat is possible within the room.  Most homes have a large central room that functions as a training room, a meeting room and a ritual room, and this room is called the kadackh.  It is the most important room in the house, and smaller homes consist of only a kadackh.

Burial sites are very sacred to the Ch’omikTaa.  Each Family will have a private burial site. Desecration of a burial site is not only one of the most dishonorable of acts, but it is also the greatest insult you can give to a Ch’omikTaan.

Ch’omikTaan wear leather almost exclusively.  They usually wear leather pants and boots and an open vest.  Chests are usually kept bare, and arms always are.  Arms are scarred and tattooed to show rank and family—left arm will show rank, and right will show family.  They will further scar, pierce and tattoo their faces, ears and bodies, each one commemorating a great victory or event in their lives.  Hair is usually allowed to grow long, and is braided tight.

Ch’omikTaan are mostly meat eaters, but a large aspect of Ch’omikTaan cuisine is use peppers and other hot spices—the hotter and spicier, the better.  Some have commented that eating a Ch’omikTaan meal is similar to fighting a battle in one’s mouth.  The primary crop in Ch’omikTaa is the yam, which grows well in their climate.  Also, a wide variety of peppers are grown in Ch’omikTaa.  Ch’omikTaan will show great pride in their pepper crop. The Ch’omikTaan don’t vary what they eat per time of day very much.  They usually eat twice a day, in the morning and at sunset.  Most meals are a combination of meat, yams and peppers: Roasted meats stuffed with yams and peppers, roasted peppers stuffed with meat and yams, stews of meat, yams and peppers, and so on.  They will drink fermented teas that are made with a variety of spices, peppers and flowers from the region.