It’s been a while since I wrote anything here, but it has been a busy, hectic few months.  And now it’s a new year!  2020 is here, and so many things are happening.

Let’s start with a rundown of things from 2019, specifically things which I am eligible for awards for:

And what’s coming up?  Well, for one, my podcast, Worldbuilding for Masochists, where I’m joined by my brilliant cohosts Rowenna Miller and Alexandra Rowland, is continuing on strong.  I’ve been having such a good time on this podcast.  It’s so much fun.  And I’ll have more news soon, but I will hint that if you are in the Dallas/Fort Worth area, you might be able to see Worldbuilding For Masochists record a LIVE EPISODE some time this year.

Also, OF COURSE, we’ve got books.  THE FENMERE JOB is out on February 25th, and, friends, I honestly think this book is exactly the delight that you would hope it would be based on “Asti & Verci and the rest of the crew face off against the Thorn.” 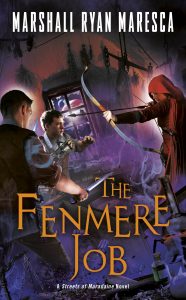 And after that, mark October 2020 on your calendars for the release of PEOPLE OF THE CITY, where so many plot threads come together to end Phase I of the Maradaine Saga.

And now, I’m working on the books for 2021, specifically THE VELOCITY OF REVOLUTION, my dieselpunk standalone fantasy of motorcycles, magic mushrooms and rebellion against colonization, and following that, A CONSTABULARY OF ONE, where we go back to the world of Maradaine, but all the way to the other side of the continent, to the city called The Mocassa, where one Druth woman finds herself having to navigate the foreign cultures, customs and languages in order to survive and find her way home.  I’m very excited about how both these books are going.