So, friends, we’re already in October, which means that we’re just a few days away from ArmadilloCon, my hometown SFF Lit convention, and this year I am one of the special guests. 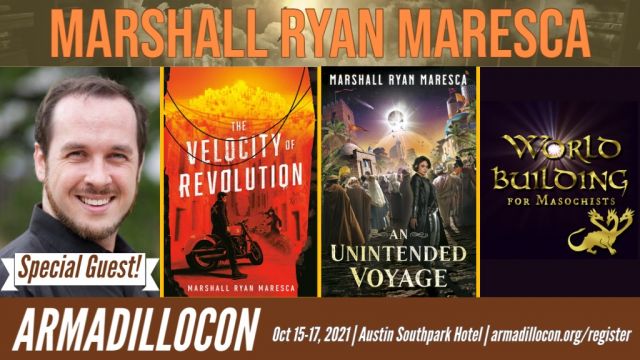 So I will be there, talking about An Unintended Voyage, The Velocity of Revolution, Worldbuilding for Masochists and the future of Maradaine.  I’ll also be teaching in the Writers Workshop.  It’ll be good to do a real, live-and-in-person event.  I did poke my head in at the Writers League of Texas conference a few weeks ago, mostly just to test the waters of being at an event again, but ArmadilloCon will be the first real one I’ll be attending since 2019.   I’m very excited.

And An Unintended Voyage is just a few weeks away!  You can still pre-order!  The initial buzz has been very strong, which makes me quite happy.  From Publishers Weekly: “Maresca returns to the universe of his Maradaine novels and masterfully expands the world beyond the reaches of the title city.”  I’m really thrilled you all will get to join Corrie Welling on this adventure, with:

Also, I’ll be making a bit more announcement about Maradaine Phase Two.  I’ve been keeping this under my hat for a little while, but the ArmadilloCon attendees will get the first sneak peak of it.

ALSO also, a reminder that I do have a Patreon, which I am terrible about using in interesting ways, BUT I have a germ of an idea of some interesting things to do over there, namely a fun way to share more worldbuilding stuff from Maradaine.

Beyond that, I hope you’ve been checking out Worldbuilding For Masochists.  We’ve had some great episodes this year, and some really fun guests lined up.  I will be at WorldCon in DC in December, and I hope I’ll see some of you there.