THEY HAD SHACKLED TARVIS TO the wall, in a dark stone cell, deep underground. Tarvis had no idea how deep. The giant bastard had taken him and Telly down, down through tunnels and steps, through places darker than any night Tarvis had ever known in the six years of his life.

That giant bastard. Gurond. Taller than anything Tarvis had ever seen. Skin that his knives just slid off of. Tarvis tried to kill him. Couldn’t. Couldn’t kill him, couldn’t save Telly.

There were voices in the dark, in the distances. The beast, with a voice like scraping a knee on the street. Other voices, old men. Couldn’t make out what they were saying.

And the other kids. Crying whiners, the lot of them. Tarvis could hear them, couldn’t see them.

The shackles were hard and cold. Small. Made to hold children. But they wouldn’t hold Tarvis. He was smaller than most, small even for a kid his age. He liked that. The bastards always underestimated him. Never expected someone like him to fight back. Never expected a kid as young and small as him to win.

But he wasn’t going to let these rutting bastards win. No damn chance of that.

Skin scraped, blood flowed. Made his hand slippery. Slipped through the rutting shackle. One hand free, he got out the knife he kept hidden in his skivs. They had taken his others, but they didn’t bother searching for more. What little kid would hide a knife in his skivs?

Tarvis rutting would, and they wouldn’t forget it when he was done.

With the knife, he was able to pop open the other shackle.

“Telly,” he said in the darkness. “We’re getting out.”

“Are you free?” some kid asked.

“Get us out,” another said.

More kids, more voices. No idea how many.

The other kids started crying more.

Another voice in the distance. Then sounds of a door opening, light searing Tarvis’s eyes. Shadowy figure of a man, dragging a kid with him.

Tarvis didn’t waste any time. Dove in low with the knife. Knee. Knee. Tenders. The man screamed, blood flowed. Tarvis grabbed the lamp as the man fell. Another stab in the neck to be sure.

The kid he was dragging—prim little bastard, dressed like a swell—just stared blankly.

“Run, you nit!” Tarvis hissed. The kid dashed off.

“Help us!” the kids all shouted, those that weren’t just screaming. Tarvis ignored them, went into the hallway.

Another door. Tarvis went to it, tried to pull it open. No rutting good.

Some more shouts down the hall. More figures coming toward him.

The giant. And two more, almost as big. From their shapes, just as monstrous.

Tarvis threw the lamp at the bastard, and flames burst forth from it as it shattered. The giant was covered in the fire.

And he kept coming.

Everything hard and cold and broken in Tarvis melted away, and for just a moment, he was the terrified little boy he’d sworn he’d never be again. In pure, uncut fear, he ran.

He ran like he’d never run before, through hallways and tunnels until he couldn’t hear or see anything but his own pounding heart in the darkness.

Alone in the dark.

Saints even knew how far down.

The screams echoed through the cloistresses’ residential wing of Saint Limarre’s. Sister Alana got to her feet as soon as she heard them, knowing exactly where they were coming from.

“You have to do something about that girl!” Sister Enigaria said as Alana came out of her own cell. “She’s—”

Enigaria glared, as did the half-dozen other cloistresses, all sticking their heads out of their rooms. None of them were happy. None of them had gotten a decent night’s sleep in weeks. Alana waved them all off.

“Up! Away from the beasts and the fire and to Saint Jontlen!”

The door to her cell was shut—latched with a key. A step that Alana wished wasn’t necessary, but the poor girl kept ending up in the streets in the middle of the night, pounding on the door of the local post or a bookseller.

Alana opened the door to see Sister Myriem—poor young girl, no clue how old she was, but certainly no older than nineteen—in just her nightshift, pounding on the wall with her copy of Testaments of the Saints. When Myriem had come to Saint Limarre’s as an angry orphan, raised by the church, Alana had seen something of herself in the girl. She had hoped that the faith and discipline of the Sisters of the Blue would have had the same impact it had had on Alana, tempering the rage. But the day she took her vows had been the beginning of something harder and darker. Myriem had faith and discipline, but also an infliction that could only be madness, losing all connection with the present moment and any and all times. Even when she was lucid, there was a sense her mind was always tuned in elsewhere.

Myriem turned to her, eyes blank and glassy, and charged at her. “I have to find Saint Jontlen!” She grabbed Alana with both hands and lifted her off the ground, carrying her out of the cell.

Saints almighty, the girl was strong.

Alana didn’t waste any more time, knowing what had to be done. As best she could with Myriem gripping her, she slapped the girl across the face. Then once more for good measure.

Myriem shook for a moment, and then her eyes focused on Alana.

“Sister,” she said calmly. “I presume I was unseemly again?” She put Alana back on the ground.

“Quite,” Alana said. “I don’t know the hour, but it is still some time before sunrise.”

“I’m sorry,” Myriem said, smoothing her nightshift with her ink-stained fingers. “I wish I could—”

“You have been,” Myriem said. “I—I know this is where I needed to be until now. And now I will go to Saint Julian’s.”

She was confused again. “You mean Saint Bridget’s.”

“Why would I—” She paused, and then nodded like she understood. “Because I must seek Saint Julian.”

“Seek him?” She had said Jontlen before. Myriem was often very focused on specific saints, including Jontlen and Julian. Alana had often found her sketching pictures of those saints, though the finished works were nowhere to be found.

“The one with the shield!” Myriem snapped with irritation, pushing Alana out of the room.

Myriem stormed out into the hall, but as soon as she crossed the threshold, her expression changed to confusion. “What . . . I was telling you about . . . someone. The tall one . . . with the shield. He comes here to see you. I saw him . . . in water, in fire. In agony. Weeping in defeat.”

Sister Alana wasn’t sure how to respond to that. She knew who Myriem meant: Dayne Heldrin, of the Tarian Order.

“Did you need me to tell him something?” Alana offered.

“Myriem, whatever plagues you, I want to—”

Myriem didn’t let her finish. She put the book into Alana’s hands, her expression one of steely resolve. “I’m afraid I have damaged my copy of the Testaments. It will be of no use to whoever inhabits this cell next. Inspector Rainey should receive it. It will give her guidance.” Her hands trembled as she let go of the book. Tears formed at her eyes, and the steel in her jaw fell apart. Suddenly she wept like an infant.

“I need to pray, Sister Alana,” Myriem said through her tears. “Pray that what guides me is truly godly. Pray that the fight ahead of me is for the light.”

“Please lock me in until it’s time for me to leave.”

“Please!” Myriem went back in to her cell and slammed the door.

Alana latched it with a sigh. She looked at the copy of the Testaments, and to say it was damaged was an understatement. Some stories were torn out, words crossed out in others, ink splattered on the pages. What horrors befell Myriem in these walking nightmares that compelled her to do this? And why would she want to give the book to Satrine?

And what, in all of that, made Myriem think of Dayne? What horrifying vision did she have of him?

PURCHASE PEOPLE OF THE CITY: 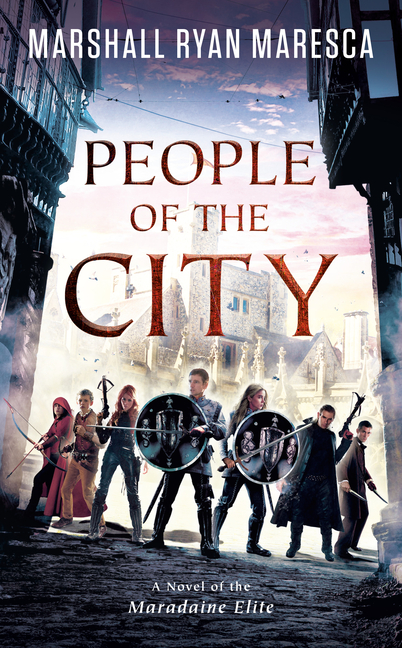