The Aventil streets teemed with Uni kids, and Lieutenant Benvin had to be a damned prefect to the lot of them. The captain had made it clear that he didn’t give a barrel of sewage what Benvin was working on. The Grand Tournament of the High Colleges was starting, so every able body in Green and Red needed to show the color on foot, horse, and wagon throughout Aventil.

Benvin knew it made sense. With the Tournament, the population of the Uni campus, and therefore Aventil, increased tenfold. Athletes came from every major college in Druthal, as well as friends, families, and other supporters. Every bed was filled, every pub was packed, and folks were pressed against each other so tightly in the street that even the city’s worst pickpocket could make a year’s pay.

Add in the sweltering summer heat that hadn’t broken all month, and the neighborhood was a stinkhole of trouble just waiting to burst.

“How many nights of this, Left?” Pollit muttered. “Because if it’s more than three, I can’t promise folks won’t be eating their teeth.”

Pollit flashed a smile. Pollit was part of Benvin’s Loyals, the squad he had put together that he trusted weren’t in anyone’s pocket. Just four footpatrol regulars—Tripper, Pollit, Wheth, and Mal, and two cadets, Jace and Saitle. The rest of the Aventil Stationhouse, they were fine enough folk, but Benvin didn’t have faith that they would really have his back in a pinch. Only his Loyals, and he knew they gave their best because he believed in them. All of them had all been outcasts amongst the Aventil regulars. Benvin had made them his.

“What makes you say that?”

“You usually don’t wear that pin on your uniform.”

Benvin glanced down at the pin on the lapel of his coat, marking his first-place win in oars for Riverview University at the Grand Tournament of 1202. “Man has a little pride in his school . . .”

“Wouldn’t have pegged you for a Uni type, Left. Certainly not one of the Elevens.”

“Drop it,” Benvin said. He wasn’t in the mood to talk about the things that led him from prominent law student at a prestigious university to street stick busting up cider rings and dice games. “Something over there.”

A handful of Uni boys—Royal College of Maradaine lads by their purple and yellow colors—were getting heated in front of the Rose & Bush. Looked like the server was telling them they couldn’t come in, and they weren’t pleased with that at all. Also, they clearly had had their fill of any pub for the night.

Saints, it wasn’t even seven bells yet. The sun was still casting long shadows down Rose Street.

“Gentlemen,” Benvin said, Pollit right at his arm. “What seems to be the dispute?”

“She won’t let us in!” one of the RCM boys said, wagging an accusing finger in the server’s face. “We gotta eat something before the opening ceremonies!”

“We’re full up!” the server snapped. “Ain’t barely room for me to walk from bar to tables. Can’t put another soul in the place!”

“Find another place,” Benvin said. “Or perhaps your beds for the night.”

“Pfff,” the lead RCM boy said. He didn’t seem to have registered who he was talking to. “We ain’t about to head in yet. We got—”

“Oy,” Pollit said. “Maybe you should note who’s telling you. Unless you want us to find you some special bunks for the night.”

The RCM boy looked at the two of them, his friends now all growing quiet as they recognized the Constabulary coats in front of them. This boy had definitely had too much cider though, as his eyes didn’t focus on them for a moment. When they did, they settled on Pollit.

That was the wrong thing to say.

In a flash, Pollit had knocked the boy in the teeth. Before he could even blink, the boy was face down on the cobblestone, irons going around his wrists. “Someone found a new bunk for the night!” Pollit shouted.

“Pollit—” Benvin tried to give a gentle rebuke, if Pollit would pick up on it.

Pollit looked up at the rest. “Any of you?”

“Going somewhere else,” the other RCM boys all said, hands up defensively. They quickly dispersed.

“Good.” Pollit had the boy up on his feet, arms bound behind him. “You see a lockwagon nearby, Left?”

Benvin leaned in. “We can’t arrest the boy just for firing your hairs, Pol.”

Pollit whispered back, “Can we have him sit in a wagon with irons on for an hour or so to cool off?”

“Twenty minutes,” Benvin said. “There’s one over there.”

Pollit gave a salute to Benvin, and then one more to the Rose & Bush server with a wink, and took the RCM boy over to the wagon.

Folks in the stationhouse talked about Pollit in not-so-hushed whispers, but Benvin paid them no damn mind. Pollit was a damn good stick, that was all that mattered.

“Pol!” Benvin didn’t need to look to know that Pollit would soon be on his heels as he ran in the direction of the whistles. He hoped Pollit at least left the Uni with a wagon driver.

“Aside, aside,” he shouted as he approached the source. A crowd had inevitably formed at the mouth of a narrow alley—not that every damn inch of this neighborhood wasn’t a crowd right now—and Benvin nearly had to beat his way through. “Constabulary, people, stand aside!”

The crowd parted just enough to let him pass, to see a young man blocking the alley entrance, whistle in his mouth. He stopped blowing as soon as Benvin approached.

“Hey, Left,” he said, dropping the whistle out of his mouth and catching it. “We’ve got some nasty business here.”

“Jace,” Benvin said, looking the cadet in the eye. “You’re supposed to be off-duty.” The boy was in civvie clothes, at least. But this kid, he never stopped working. Benvin admired him, to be sure, because he had a heart that was pure Green and Red as he had seen. Came from a family eight or nine generations deep in the Constabulary. When that crazy stampede went through the neighborhood two months ago, Jace had nearly got himself killed jumping onto the lead horse to blow out warnings. That was why Jace was part of the Loyals, but Benvin had to fight the boy to get him to go home sometimes.

“I was, Left, honest. On my way home when a couple folks spotted this. Had to put in the call, and then keep these folks off the scene.”

Jace nodded into the alley, while popping the whistle back in his mouth to make a new call, signaling that an officer was on the scene and they would need inspectors and the bodywagon to come.

Not that Benvin really wanted any of the Aventil Stationhouse inspectors to come. None of those chairwarmers were worth their rank, none of them could be counted on. Odds were they would come, glance at the body, and leave the work to him.

Pollit was now at the scene, giving a slight nod of regard to Jace. “Sorry about that, Left. Just getting that tosser comfy in the wagon.”

“Ain’t you supposed to be home?”

Benvin ignored them, instead looking at the body. Definitely a murder. Four arrows were buried into his chest. Young man, about twenty or so. Scruffy, dirty, and unkempt. Face beat bloody, head cracked. Shirtless, but wearing a fur-lined coat. “A Red Rabbit.”

“Ain’t seen many of them since the last big street row,” Pollit said.

“No,” Benvin said pointedly. He pointed to the chevrons on the coat, and tattooed to the boys’ neck. “And a captain at that. Is this Keckin?”

“Could be,” Pollit said. “Saints, this is brutal.”

Benvin had to agree. The four arrows were all from head-on. Keckin—if this was Keckin—wasn’t running or even fighting back very well when this happened. Looked like he was shot, beaten, and then shot again. Someone wanted to make him suffer.

“Didn’t happen here,” Benvin added. He looked up to the top of the building. “Maybe on the roof, and he was dropped down after shooting him?”

Pollit gave his own glance up and down. “Makes sense. This couldn’t have gone down around this crowd.”

Benvin pulled one arrow out of the body. “And not too many people would use a bow in this neighborhood.”

“Nah, couldn’t be,” Jace said. He seemed almost spooked. “I mean, he’s never left a body like this before.”

“Then he’s stepped up his game. Let’s add it to the list of charges we’ll lay on the Thorn when we catch him.”

Benvin didn’t like it at all, either. With everything else going on in the neighborhood, the last thing they needed was for the Thorn to move on from being a vigilante menace to a vengeful murderer. This might have been a Red Rabbit scum that Benvin would have ironed and locked up given the chance, but he didn’t deserve a death like this. Nobody did.

But it did mean one thing. Now Benvin had the cause he needed to act.

“Spread the word, boys,” Benvin said. “As of right now, I’m calling an All-Eyes out on the Thorn.”

PURCHASE THE IMPOSTERS OF AVENTIL: 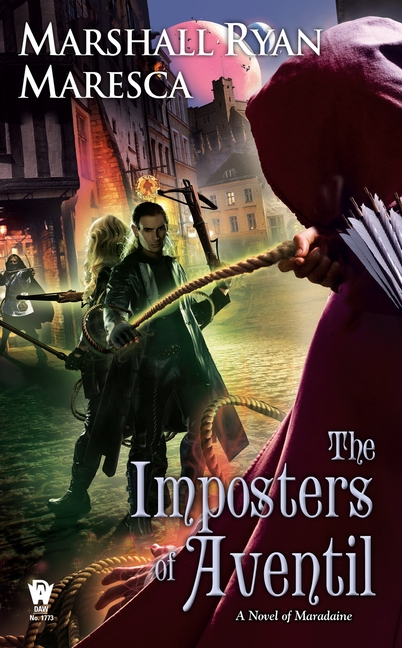