THE STREETS OF NORTH SELETH were quiet again, according to all the folks at the Keller Cove Constabulary House. But that was a lie.

Lieutenant Jarret Covrane knew that quiet was really a low murmur, a teapot ready to boil. Despite being told that the neighborhood wasn’t his problem, he made a point of walking his own patrol in North Seleth each evening. Almost no constables from Keller Cove bothered going west of Evans, save those being punished with a posting at the waystation, and none from the Seleth house went north of Elk. And the folks in the Benson Court Constabulary House weren’t worth talking about.

So he made the walk every night, uniform coat crisp and buttoned to the collar, despite the heat. Summer had been brutal, and even though it was now autumn, the heat hadn’t broken. Even now, with the sun going down, there was little relief.

He waved amiably as he passed the lamplighter crew—two young boys and old Missus Terrendill. They diligently lit the streetlamps each night, even though within the next hour, half the lamps would be snuffed and robbed of their oil. That’s how it went every night.

A handful of young men spotted him and scurried into Nander’s Pub. Crease Knockers, by the look of them. There were handfuls of these little gangs popping up around the neighborhood. Crease Knockers, The Potato Boys, The Three-Fingers. He had lost track. The Scratch Cats ruled the roost right now, and he heard that Bessie’s Boys were gone. The rumors were that Miss Bessie was killed in the Election Riots, but Covrane didn’t take those seriously.

He turned the corner onto Kenner Street, which was still fairly busy, even with most of the shops locking up for the night. He wondered how many people were crammed up in the apartments above each one. Rents were getting higher, people were making less, and half the shops in the neighborhood were abandoned. After the fire, the riots, the squeeze from the gangs, the people who could leave did, and few people were opening new shops in this part of town. One new business, however, was one Covrane made a point of visiting each night on his rounds.

“Wondering if you were going to make it before I was done,” the proprietress said as he walked up. Helene Kesser pulled shut the wrought-iron gate that protected her cheese and charcuterie shop. “You running late?”

“Paperwork,” he said. He leaned in as he approached. “Too late to get a nibble of something?”

“I’m afraid so, constable,” she said with a wicked smile. Closing the distance, she added, “You’ll have to settle for this.” She kissed him, quick and fierce, and then pulled away.

“Definitely all for now,” she said. “But maybe you can knock on my door around ten bells, once Julien is asleep.”

“I’d like that,” he said. “I should probably finish up my rounds.”

He chuckled ruefully and continued down the alley. Helene Kesser, she was—she was exactly like this neighborhood. He was certain she had a crooked past—she knew far too much about crossbows for him to believe otherwise. But despite the dirt on her soul, she had a decent heart and wanted a simple, clean life. Surely some chicanery was involved in her going from slinging goxies to running her own shop with her cousin, but whatever that was, she seemed determined build a better—and honest—life now.

That was the case all over North Seleth. Covrane knew there were hundreds of Helenes. He would help keep their lives better and safer for them. He saw no need to dig up the past of people who were clearly on a path to reform their lives.

“Evening, constable,” a pudgy man said with a tip of his round hat as Covrane came out of the alley. Simple man in a simple suit, probably working an honest job at the docks or a counting house. “Good to see you about.”

“Good evening to you, sir,” Covrane said with a nod. Respect for these people, for this neighborhood. Covrane would bring it, even if he had to do it all on his own.

Hal Elman was pleased to see a constable strolling the street as he made his way from the office. First to the bakery to fetch his wife, and then home, and hopefully another quiet evening of the two of them. Quiet evenings were, it seemed, starting to be the norm again, which Hal deeply appreciated. After the fire had uprooted Lian’s sister’s family, followed by weeks of madness and danger, things had settled. Maybe soon Lian would be willing to walk home from the bakery on her own again. Not that he minded, it was a pleasant nightly ritual of fetching her and walking home, but he didn’t like that she was always so frightened. Despite that, she had insisted of continuing to work in the bakery with her sister, Raychelle. He was proud of her for that.

But the bakery itself made him nervous. Possibly because Raychelle’s husband had “inherited” the place under mysterious circumstances which Hal had never fully understood or believed. And, to be honest, Verci Rynax smelled of trouble, and his brother, Asti, even more so. Disreputable, to say the least.

Not because they’re Kieran, Hal said to himself. There were plenty of fine folks who were Kieran. Some very respectable businessmen. Hal was not like his boss, Mister Bradford, who would spit and mutter, “Stinking greasy piries” all the time. But he understood why some of them—like that Asti Rynax fellow—made people nervous.

There were plenty of people who mad Hal nervous, of course. The new folks who moved into that Magic Circle house on the corner of Ullen and Holver Alley, for example. One of them was walking by right now: a striking woman with sharp, drawn features, standing out even more because she wore trousers, waistcoat, and thin-brimmed hat of burning yellow and orange. Hal had seen her and a couple of the others on a few occasions on his way home from work, but he had never found the courage to even say hello.

They were neighbors, after all. But, mages. That was a bit frightful. He didn’t know anything about magic. He had never met a mage in his life. In his University years, there was the one chap who lived on his dormitory floor who was supposedly a magic student, but he turned out to be a chemist or something who later was kicked out.

Still, Hal couldn’t help turning his head to watch her as she passed by. Something mysterious and poised and even regal about the woman really—

He had plowed into some kid on the walkway.

“Yeah, I know what you weren’t,” the kid said. “Stop being such an oaf!” He darted off.

Hal shook his head. He needed to be more careful, especially on these streets. Half the people here would rob you as much as look at you.

Suddenly realizing, Hal checked his coat pocket. His coin purse was gone. Again. And that kid was well out of sight.

He sighed. Fourth time in as many months. He needed to wise up and stop letting that happen, if he and Lian were ever going to save up enough to get out of this neighborhood. He had a feeling they needed to do that soon.

The fat man in his stupid hat was always an easy mark. Enick had stolen his coin purse at least four times in as many months, and the fool was never any wiser. Enick almost felt bad for him, but that guy clearly had enough to eat. He dashed down the alley, went around the back of the tenement, and climbed the iron back ladder to the crash flop.

“Enick decided to show up,” Mister Pent said. He was, as usual, half drunk on turned wine and walking around in his skivs. Peeky and Telly were sitting on the floor—the part of the flop where the wood wasn’t so rotten you’d fall through—counting coins.

“Yeah, I been running about, getting things done,” Enick said. He didn’t like Cobie Pent, but for some reason Peeky and Telly latched on to him. Sure, he had escaped from Quarrygate and, when he was clear-headed, told them some pretty smart things. Not that there was much anywhere else to go. Bessie’s Boys were no more. Jede was dead, Tarvis was in the air, Conor was in with the Scratch Cats and Lesk’s crew. Peeky and Telly were all Enick had left. They needed a place to crash, and this flop with Mister Pent was as good as any. That one time a Crease Knocker had chased them here, Mister Pent thrashed him solid, cut open his throat, and got rid of the body in the night. Even Enick had to admit, Mister Pent was good for protection, didn’t beat any of them, and mostly just wanted food and wine while he stayed hiding in the flop.

There were worse arrangements.

Enick dropped his takings on floor. “Doing all right. Was able to walk right into Porky because he was eyeing some bright skirt walking by.”

“That’s good work it is, boys,” Mister Pent said. “All right, you take that, get to the bakery and get a couple loaves.” He looked out the window. “Sun’s down, so the cheese shop is shut, same with the butcher. Split up and get to the grocer if you can.”

“The cream’ll be spoiled by morning, boss. Ain’t like the ice truck drops off to us.”

Telly scooped up the coins and scrambled out the window, and Enick tagged behind him. When they hit the dirt, Telly dropped a few coins in his hand. “You get the bread, Peeky and I will go to the grocer.”

Enick ran over to the Junk Avenue Bakery. He always wondered why they would steal money but never just steal bread from the bakery. Mister Pent said that wasn’t done, especially that bakery. “Treat it with respect.”

He reached the bakery as the lady was blowing out the lamps inside. But still, she hadn’t latched the door.

“Closing!” she said as he came in.

“I just need whatever loaves you got!” he said. “I got money!”

The baker lady squinted at him. “Do you?” She walked about around the rack to behind the counter. Moving like she wanted to keep something between him and her. “Let’s see.”

He held out the coins.

“I have three loaves that I’ll give you for six ticks,” she said. “How’s that?”

“Deal, Missus Junk!” he said, putting the coins on the counter.

“I’m not—” she shook her head. She grabbed the loaves off the rack and wrapped them up. “Be safe out there, hmm?”

“Always am,” he said, grabbing the bread. Still, she looked like she meant it, unlike most of the other shopkeeps on this street. Maybe that’s why Pent respected the place. Maybe this bakery was special. 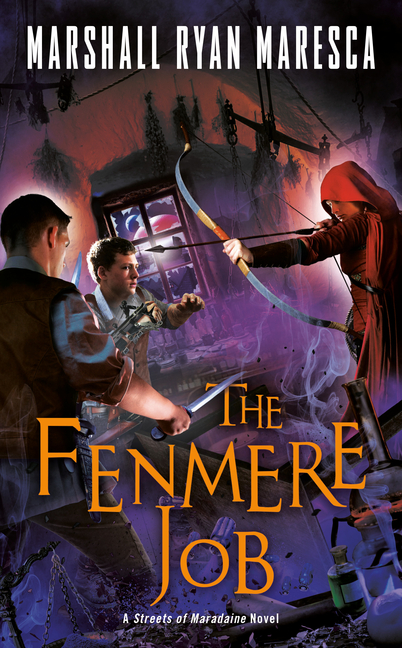