The Dogs’ Teeth Pub was an ugly atrocity of lumber and plaster wedged in the empty space between the row houses at the intersection of Cole and Hester. Bell was amazed that the University allowed such an eyesore to exist so close to their campus, but they never did anything about it. Maybe it suited their purposes, having something so obviously dangerous and disreputable in clear sight. It kept all but the most foolhardy of students from crossing Waterpath.

As far as Bell was concerned, that was just fine. Mister Fenmere felt the same way. Not that Mister Fenmere couldn’t handle some heat from University, but if trouble came from there, it was best to keep it to a minimum.

Mister Fenmere had been pretty blazing quiet for a while, until a few days back. “Nevin’s boys have to be brought back in.”

This wasn’t what Bell was supposed to do, not anymore. But he knew he was being punished for the last month as well. If menial roundup jobs got him back in good graces, he wasn’t about to complain.

Dogs’ Teeth was the last loose end, the last two of Nevin’s dealers. The rest had come back into the fold without any trouble. Blazes, they were eager. They needed the coin, they had people begging for any vial of effitte they could get. That was good, drove prices up. People were now paying a full crown for a vial, sometimes even a crown and five. Once things had settled in this part of the neighborhood, they could keep prices right there, and people would blazing well pay. More money for Bell, and more for Mister Fenmere.

That should blazing well make the old man happy again.

Bell went in, the reek of stale beer and filthy people assaulting his nose. He immediately decided this was the first and last time he would come in here. He’d make sure Nevin’s boys found somewhere else to meet with him. The place was also extremely dim. Bell wasn’t sure if that was an intentional choice, or if they simply couldn’t afford the lamp oil to light the place properly.

He went up to the barman, a rotund beast of a man with a bald head and more scars on his hands than Bell had ever seen. “Lendle and Jemt?”

“You mean Lemt and Jendle?” the barman asked. “Who’s asking?”

“A man who shouldn’t have to come in here to ask.” Bell tapped on the bar, making sure his ring was visible enough to the barman. Even a gutter filth barman in a place like this, deep in the mires of Dentonhill, would know that ring, and know that only one of Fenmere’s close men would dare to wear it.

“There ain’t gonna be trouble here, is there?”

Bell glanced around the place, filled with broken steves and facks, the kind who barely make it through a day’s work without a dose of effitte and many cups of the Dogs’ Teeth’s swill down their throats. “You’re probably no stranger to trouble.”

“There’s usual trouble and real trouble,” barman said. “Usual I can handle. I don’t need any more real on my place.”

The barman signaled to one corner, where several tables had been pulled together, and two blokes played cards there, surrounded by what could charitably be called the best-looking women in the place. That meant they were the only women who didn’t look like they were a dose away from a life in ’fitte-trance.

“Gentlemen,” Bell said, coming over to the table. “If we could have a moment to discuss matters.”

“Who the blazes are you?” one of them asked.

“You Lemt or Jendle?” Bell asked. The two of them were almost the same guy—dark hair, scraggly beards, pocks and scars on their faces. Burly enough to be scrappers, but not the kind of guys you would hire to be muscle.

Bell held up his hand to show his ring, and then popped Lemt in the face. “Go roll yourself, that’s who I blazing am.”

“Cozy,” Bell scoffed. “The two of you are a couple of fools, you know that?”

“Why is that?” Lemt said, holding his nose. “We were doing fine, and Nevin gets himself killed. We didn’t even hear proper. Then we hear nothing at all.”

“We figured, you know,” Jendle said, “We figured with Nevin gone, you folks were done with us. All clean, you know?”

“I really don’t know,” Bell said. “Nevin’s boys had to sweat for a few weeks. But business needs to get back up, and you two are back in business.” He took his small leather journal and a charcoal stylus out of his vest pocket.

“Well, stop with figuring,” Bell said. “Figuring is for captains, not for toughs and scrappers.”

“Yeah, but,” Jendle said. “What with what happened and all, we figured we were lucky to be breathing. Thought we should keep our heads low and keep it that way.”

An old man sitting a couple of tables away started cackling. “They mean they’re a couple of squealers!”

“You two,” Bell said. Now this made sense. “You’re the ones who pointed the . . . who gave up Nevin.” He almost said the name. He hadn’t said it in almost a month. Nor had Fenmere.

“You didn’t know?” Jendle asked. He smacked his partner. “I told you they didn’t know.”

“No,” Bell said. “We knew some of Nevin’s boys had, but he protected who it was. So it was you two.”

“They sure did!” the old man cackled.

Jendle sneered at the old man, then turned back to Bell. “So, now? You gonna drop us in the creek?”

“No,” Bell said. “What happens is you two go back to work. You two are going to sell, and you’re going to make sure you bring in a hundred crowns a week.”

“Each,” Bell added. He tallied that amount under their names in his journal and put it back in his vest pocket. “You’ll do that, because Nevin vouched for you. Because we need to build up again, and you boys are the ones to do it.” He reached under his coat and took out the leather case of effitte vials. Not much, of course, just enough to get these two fools started again.

“You’re building up here again?” The old man was the one asking.

“None of your business, codger,” Bell said. This old man was getting on Bell’s nerves. He tapped his fingers on the table, making sure the old man could see his ring. “Best steer clear.”

“Oh, fine,” the old man said, turning back to his cider.

“You two are back to work, hear? And you answer to me.”

“We start selling again, he’ll come for us.”

“You’re talking about the—” Bell shook his head. “That ain’t your problem, you hear? You do what you’re told.”

Lemt’s hands were shaking. “You say that, but who’ll protect us when he comes crashing in here?”

“You know who they’re talking about, don’t you?” the old man asked.

“I still ain’t right when I go to the water closet,” Lemt said.

“So what happens when he comes?” the old man asked. He got up from his seat, leaning on a cane, and came over. “What are you going to do to protect your boys here, Bell, when the Thorn comes for them?”

“You afraid of the Thorn, Bell?”

The old man leaned in. “Because you’re my favorite, Bell.”

Bell stumbled back, shoving at the old man, who laughed and melted away, becoming someone else in front of his eyes. Wrinkles smoothed, white beard pulled into a sharp, bare chin. Raggedy clothes became a sharp burgundy cloak and vest. Walking stick changed into a fighting staff. The face was still hidden by a hood, casting an unnatural shadow that had to be magic, but Bell knew exactly who was in front of him.

Bell went for his sword, but the Thorn moved faster, and that infernal rope was suddenly wrapped around his hand. With a flick of his wrist, the Thorn then looped the rope behind Jendle’s neck and yanked. Bell’s fist collided with Jendle’s face.

“Son of a—” Jendle managed to get out before he was hit.

The Thorn drew up his staff and jammed it into Bell’s leg—right in the same blazing spot he had put an arrow a month ago. Bell crumpled to the floor before he could stop himself.

“Blazes!” Lemt shouted. “Someone get to a blasted whistelbox! Call the sticks!”

“Sure,” the Thorn said, swinging the staff around to crack it against Bell’s head. “I come in, and suddenly you all want the Constabulary.”

Bell tried to grab at the Thorn’s legs, but he was reeling from the last blow. The Thorn had jumped onto the table and pinned Lemt to the wall with his staff.

“The rest of you, try to enjoy your beer,” the Thorn said. “I’ve no quarrel with you right now.”

“You’ll get a quarrel!” the bartender shouted, pulling out a crossbow from behind the bar. He fired, almost wildly, and hit Lemt in the arm instead of the Thorn.

The rope shot out across the room and tore the crossbow out of the barman’s hands. “I really loathe puns, sir. You’re better than that.”

He jumped off the table, landing on Bell, knocking his breath out and forcing him back down to the floor. While Bell was reeling, the Thorn pawed at him for a moment, and then sprung back up. The bastard was already out of the way before Bell could do a blasted thing to stop him.

“As for this,” the Thorn said, holding up the effitte case, “It’s not going to hurt anyone.” It lit up in a burst of blue flame, and was gone.

The Thorn raised up his staff. “You’ll let Fenmere know that I haven’t forgotten him.”

The staff smashed into Bell’s face. The next few moments were cloudy and dazed, until he found himself being hauled to his feet by Jendle and the barman.

“I told you,” Jendle said, holding a rag over his bleeding nose.

“I didn’t want any trouble,” the barman said.

The Thorn was gone.

“Blazes,” Bell muttered. He pushed them both away and dusted himself off as much as he could. Some small attempt to maintain his dignity. Brushing his hands on his vest, panic rushed through him. He checked both pockets, looked back to the floor, and at the table. Nothing. His journal was gone.

Fenmere was going to have him for lunch over this.

PURCHASE THE ALCHEMY OF CHAOS: 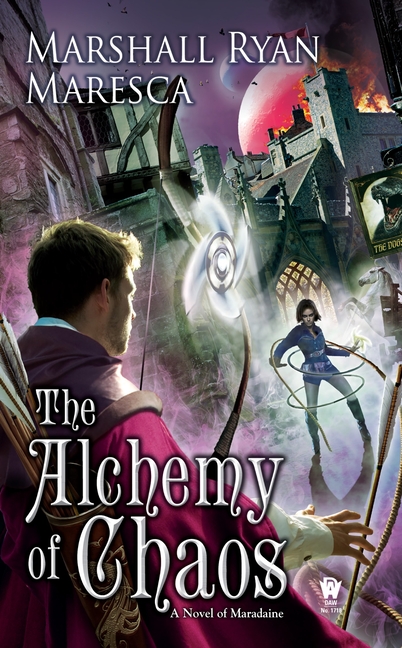