Blending high fantasy, crime fiction and daring heists, the Streets of Maradaine features Asti and Verci Rynax, two former thieves who tried to go straight, but dragged through the ashes of tragedy back into their old life, gathering together a crew of friends and neighbors to pull off the impossible.

“While Maresca has been building the Maradaine universe across multiple books and connected series, The Holver Alley Crew marks a new chapter in the city’s story, and a great entry point for new readers.” – Barnes & Noble Fantasy Blog

“The whole narrative is tightly plotted, and each page makes you want to turn to the next – it’s got fires, knife fights, brawls, daring escapes, explosions, and a lot of heart – and as such, I’m looking forward to seeing what adventures the Holver Alley Crew go onto from here.” – SF & F Reviews

“Marshall Ryan Maresca has quickly become one of my favorite authors and I genuinely look forward to each and every one of his new releases.” – Powder & Page 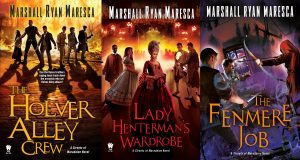