“It’s a compelling, convincing work of fantasy, and a worthy addition to the rich tapestry that is the works of Maradaine.” -SF and F Reviews

“The Way of the Shield is at its best when they’re running around in the streets getting themselves beaten up by political subversives and the constabulary, and dealing with the consequences of their decisions. Maresca writes solid action scenes and has an eye for the believably absurd.” —Locus

“I love seeing good-hearted characters who keep true to their moral centers even in a gritty world. Shield of the People is wonderfully emotionally complex while also barreling through fantastically-paced action. Highly recommend!” – Cass Morris, author of From Unseen Fire 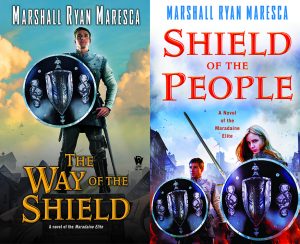 THE WAY OF THE SHIELD

Dayne finds Maradaine in turmoil, as revolutions and dark conspiracies brew around him, threatening members of Parliament and common people alike. Dayne is drawn into the uproar, desperate not to have one more death or injury on his conscience, but the Order wants him to stay out of the situation. The city threatens to tear itself apart, and Dayne must decide between his own future and his vow to always stand between the helpless and harm

SHIELD OF THE PEOPLE

The second novel in the Maradaine Elite series blends fast-paced high fantasy and political intrigue, where Dayne and his compatriots get embroiled in a plot of dissident groups threatening to disrupt Parliamentary elections and throw Maradaine into chaos.

After stopping Tharek Pell and saving the Druth Parliament, Dayne Heldrin and Jerinne Fendall find themselves on the margins of the Tarian Order: lauded as heroes in public but scorned and ignored in private, their future in the Order hazy. Dayne is given an assignment that isolates him from the Order, and Jerinne is hazed and bullied at the bottom of the initiate rankings.

But it’s a grand holiday week in the city of Maradaine, celebrating over two centuries of freedom and the foundation of the reunified modern nation, and with that comes parades, revelry… and protests and demonstrations. A dissident group called The Open Hand–and their mysterious, charismatic leader, Bishop Ret Issendel–seeks to disrupt the Parliament elections with their message of secession and dissolution.

Despite orders to stay out of the public eye, Dayne and Jerinne are drawn into the intrigue of the Open Hand and kept apart by dark powerful conspiracies that brew around them. Dayne and Jerinne must fight for their own principles, and protect the will of the people as the election is thrown into chaos.

PEOPLE OF THE CITY
Forthcoming October, 2020

Goodreads Page for THE PEOPLE OF THE CITY