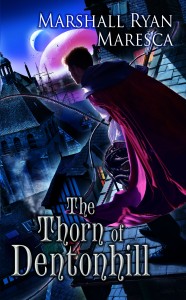 Let me answer the question “What Publishing Method Is Best?” with the vague answer, “That depends on you.”   I can tell you that, for me, the Traditional Publishing route was the best route.  Hands down.  I’m thrilled to have my books with DAW, and all the benefits that gives.  I’m not cut out for the self-publishing game, which requires a larger degree of chutzpah and hustle and salesmanship, let alone having to wear the Editor and Publisher hats.  Not for me.

“But, Marshall,” you’ll say, “Not everyone gets that option.  There are the gatekeepers, Marshall!  The gatekeepers!”  Yes, that’s true.  I think that’s a value-added feature, but for someone striving to get through the gatekeepers to a publishing deal, I can see how it’s mostly a frustration.  And thus self-publishing can appear alluring.  You get your stuff out there!  The people will decide! 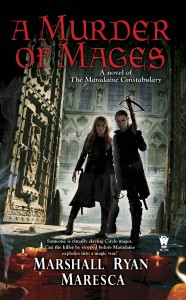 Yeah, it doesn’t really work that way, because “out there” isn’t enough.  There’s the next level of gatekeeping; the quieter, more insidious one.

The Filter of Who Gives A Damn.

The fact that your book is out there, even with a pretty cover and the sabre of a Big Five Publisher to rattle, doesn’t mean much when there is SO MUCH OUT THERE.

For example, the now-shuttered SFSignal (sniff) would put out a monthly list of All The Stuff they could find that was coming out that month in SF, Fantasy and Horror.  For February, the month The Alchemy of Chaos came out, they listed 229 books.  That’s just the ones that have some form of publisher behind them.  And Alchemy is there, at #61.

But most of the review sites, news sites, blogs, etc. that talk about Genre Lit only have so many that they can talk about.  They have to pick, say, 10-12 each month to highlight as the ones they think are the most interesting.  When it comes to actually reviewing, there’s the logjam of how many books the reviewer can actually read and write about.  Even a hyper-prolific speed-reader isn’t going to break, say, 50 reviews a month.

But the thing is, it’s not that no one gives a damn, it’s that they only have so many damns to give.  Publishing in and of itself isn’t a zero-sum game, but the inches devoted to talking about what books are coming out is. 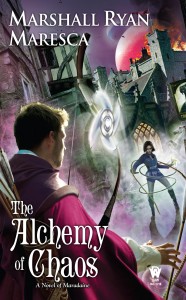 The thing is, no one really knows what the magic bullet is for having a book be one of the Books People Are Talking About, beyond that special alchemy of a great book at the right time that gets into the right people’s hands.  And even with the power of a Big Five Publisher behind you, they have limited power of what they’re going to push, and how much they spent on something is a factor on how hard they’ll push.  The book they gave a half-million dollar advance to is the one they’re gonna try to get Time or Newsweek to talk about.  Not the twenty they gave $10K advances to.

If you aren’t a person who can hustle to get one, just getting your book “out there” isn’t going to be enough.

So make good choices, and good luck out there.