Mixing high fantasy, urban fantasy and superheroics, this series follows the exploits of Veranix Calbert, struggling magic university student by day and armed vigilante by night, as he seeks to rid his neighborhoods of the drug kingpin Willem Fenmere and his entire criminal empire.

“Veranix is Batman, if Batman were a teenager and magically talented.” —Library Journal

“It takes a fun addictive book that I just outright enjoy for me to read it that fast, and this is that type of book.”  – The Speculative Herald 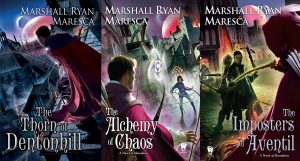 Veranix Calbert leads a double life. By day, he’s a struggling magic student at the University of Maradaine. At night, he spoils the drug trade of Willem Fenmere, crime boss of Dentonhill and murderer of Veranix’s father. He’s determined to shut Fenmere down.

With that goal in mind, Veranix disrupts the delivery of two magical artifacts meant for Fenmere’s clients, the mages of the Blue Hand Circle.  Using these power-filled objects in his fight, he quickly becomes a real thorn in Fenmere’s side.

So much so that soon not only Fenmere, but powerful mages, assassins, and street gangs all want a piece of “The Thorn.” And with professors and prefects on the verge of discovering his secrets, Veranix’s double life might just fall apart. Unless, of course, Fenmere puts an end to it first.

Explore the back alleys of the city in this street-level fantasy adventure, the first novel of the Maradaine series.

THE ALCHEMY OF CHAOS

The saga of the streets of Maradaine that began in The Thorn of Dentonhill continues….

Veranix Calbert is The Thorn—the street vigilante who became a legend to the people of Maradaine, especially the gangs that run the neighborhood of Aventil. The Thorn continues to harass Willem Fenmere, the drug kingpin of the Dentonhill neighborhood. Veranix is still determined to stop Fenmere and the effitte drug trade, especially when he discovers that Fenmere is planning on using the Red Rabbits gang to bring the drug into Aventil.

But it’s also Exam Week at the University of Maradaine, where Veranix is a magic student. With his academic career—and future as a mage—riding on his performance, Veranix needs to devote himself entirely to studying and participating in a fellow student’s thesis experiments. There’s no time to go after Fenmere or the Red Rabbits.

Then a series of strange pranks begin to plague the campus, using a form of magic that Veranix doesn’t recognize. As the pranks grow increasingly deadly, it becomes clear that there’s someone with a vendetta against the university, and The Thorn may be the only one capable of stopping them. Between the prankster, the war brewing between the Aventil gangs, and the flamboyant assassins Fenmere has hired to kill him, Veranix may end up dead before the week is out. Which just might be preferable to taking his exams….