The Holver Alley Crew is now showing up for pre-order at Amazon and Barnes & Noble.  And with that, it’s now got a release date: March 7th, 2017. 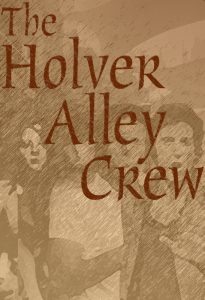 So, what’s The Holver Alley Crew all about?

The Rynax brothers had gone legit. Service in Druth Intelligence had shattered Asti Rynax’s nerves.  Marriage and fatherhood convinced Verci Rynax to leave his life of thievery.  They settled back in their old neighborhood in West Maradaine and bought themselves a shop, eager for a simple, honest life. Then the Holver Alley Fire incinerated their plans. No home, no shop, no honest income, and saddled with a looming debt, they fall back on their old skills and old friends.

I’ve included some scratch art I did as part of my process.  Do not think this represents the actual cover art in any way.  This is just me playing with Photoshop.  Hopefully, in a few months, we’ll be seeing another Paul Young cover that will do fantastic justice to this book.

Also mark your calendar: This weekend I’ll be at the Writers’ League of Texas Agents and Editors conference.  Of course, I’m neither agent nor editor, nor am I in search of one, but I’ll be offering my sage advice (such as it is) for hopeful writers who are.